A 28-year-old Syrian man accused of crimes against international law has been sentenced to five years in jail, and is now only the third person ever in Sweden to be convicted of war crimes. “Overall we are pleased with the ruling. We find that the court has made the same judgment as we have,” says Hanna Lemoine, prosecutor, and described the case as one with several difficulties.
The critical evidence was a film of a brutal beating (see SPR 26 February, Midday Ed.) that took place in Syria in 2012 and was uploaded to social media. Hans Brun, researcher into terrorism at Kind’s College, now hopes that the ruling will have importance in the future. “Then the major problem is those who return to Sweden from war zones and who cannot be convicted. Parliament and the government must consider this issue appropriately.” [http://www.svd.se/nyheter/inrikes/fem-ars-fangelse- for-folkrattsbrott-i-syrien_4363965.svd Accessed 2015-02-27 08.53]

During their meeting in Berlin yesterday Swedish Prime Minister Stefan Löfven and German Chancellor Angela Merkel agreed that they shared common interests in terms of migration and integration, and said they would now call for a fairer distribution of the refugee burden in the European Union. The two heads of government also discussed the crisis in Ukraine and relations with Russia, agreeing that diplomacy must be given a chance to succeed. However, neither rule out the possibility of new sanctions, if the truce is broken. 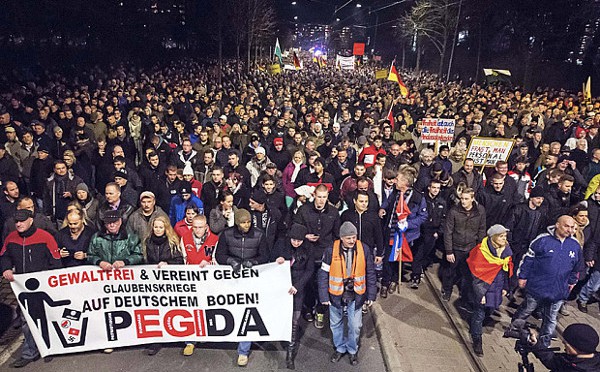 Some two hundred people gathered on Raoul Wallenberg square in Stockholm on Saturday to demonstrate against violence and hatred after the terror attacks in Paris and Copenhagen. Prime Minister Stefan Löfven, who had been invited to speak at the demonstration, said Sweden must never accept that hatred be allowed to take over people’s lives.

Since the two terror attacks the Swedish Security Service and the police have been in closer contact with Jewish communities in Sweden, and Home Affairs Minister Anders Ygeman has also pledged more funding to raise security around Jewish buildings and institutions.

This is a quote