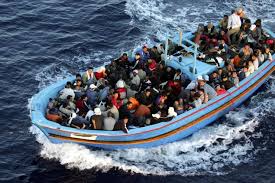 European Union ministers meeting in Luxembourg on Monday proposed doubling the size of the EU’s search and rescue operations, as the first bodies were brought ashore after what could be as many as 900 were killed in the latest capsize in the Mediterranean.

In October 2013, after 400 African migrants drowned on their way to Italy, the Italian Navy began to patrol large areas of the Mediterranean in order to rescue the migrants who were trying to make their way to Europe in rickety boats. The operation, known as Mare Nostrum, was costly and Italy requested other EU member states to help fund and participate, via the EU border agency Frontex.

“More funds need to be allocated to Triton and Frontex so they can handle the situation. But we also have to stop the traffickers who send people out to sea in these kinds of boat,” said Swedish Foreign Minister Margot Wallström from Luxembourg yesterday.

A blockade of the coast of Libya, from where 90% of the migrants start their journey across the Mediterranean, is not feasible, since it would play into the hands of the traffickers. However, the European Commission proposed on Monday that efforts should be made to capture and smash the Libyan smugglers’ boats.

Italian PM Matteo Renzi has said that it is impossible to return the migrants to Libya, because of the chaos there.

“Everyone is agreed that the EU and the member states must back the head of the UN support mission in Libya, Bernardino Leon, and give him all he help he needs to hopefully get an international coalition government in Libya,” said Wallström on Monday.

EU heads of state and government will meet in Brussels on Thursday to discuss migration.